Recently, Samsung introduced two new smartphones, Galaxy A6 and Galaxy A6 +. Both new items have already gone on sale. And smartphones have features for which they can be bought, but those that can give preference to other devices. In this review Samsung Galaxy A6 about this and talk.

See comparison between: Samsung Galaxy S8 vs Huawei P10 Plus

Appearance Of Galaxy A6

Externally, the Galaxy A6 looks like it’s from a different lineup – Galaxy J. It is there that there are such unusual inserts for the antenna. It can not be said that it is beautiful or ugly, someone will like it, but some will not. But in blue the smartphone looks good. And there are golden, black and lavender colors. The size of the Galaxy A6 can be said to be perfect. It has a 5.6-inch elongated display, with an aspect ratio of 18.5: 9, the frames around the screen are not the narrowest, but the overall impressions from the smartphone are only positive. It fits perfectly into the average palm and is generally very comfortable. Still, this size of smartphones is almost perfect.

On the one hand, the arrangement of the elements is standard – the power button on the right and the volume rocker on the left. On the other hand, a non-standard speaker on the right side, which resembles the Galaxy J. line-up. Plus, the fingerprint scanner is quite high here. It is connected by a common frame with the camera, so finger hit on the lens is provided here, and as a result, it will have to be regularly wiped. In a word, the fingerprint scanner is not located in the most convenient place, but you can get used to it. 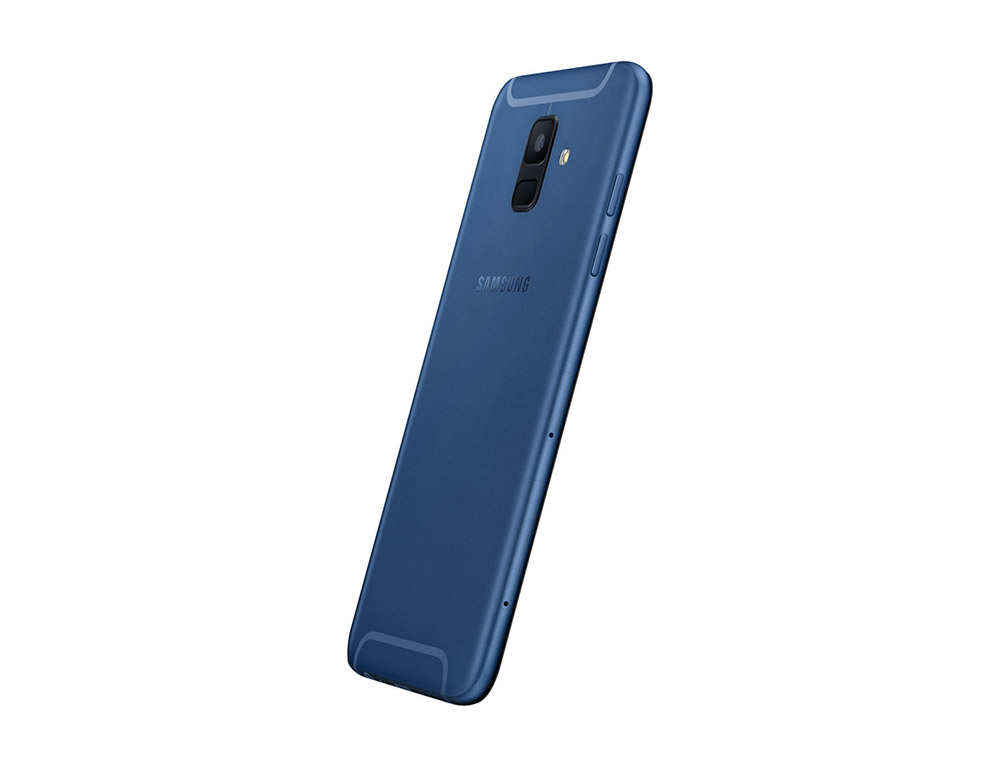 As an alternative, it is offered to unlock the face. I must say that it works quite stable, but the speed of operation is so low that not everyone has enough nerves to wait until the screen is finally unlocked. The fingerprint scanner works faster, but also very thoughtful. 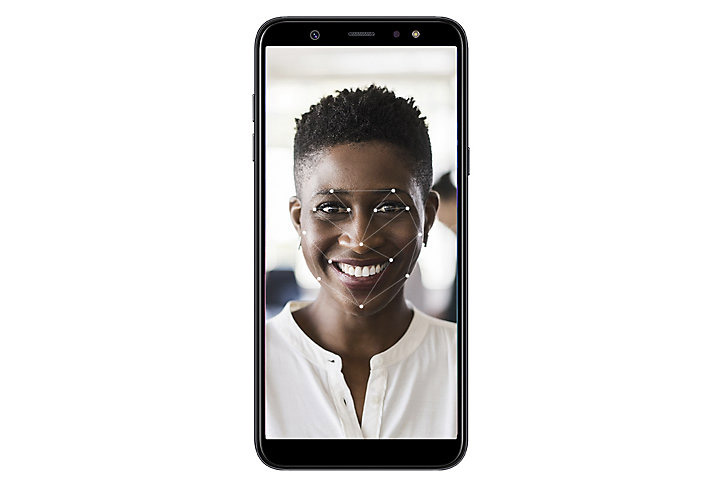 For Samsung, this is a low-end smartphone, so do not be surprised that there is no USB Type-C. Charging and synchronization is realized by the old good Micro USB. This is not a problem, but given the price, I would like to have some modern chips. But in A6 there are at once two trays, in the first compartment for nano-SIM, and in the second one more tray for SIM-card and for a memory card. In general, everything and immediately and does not have to sacrifice anything. The smartphone is assembled very well, and the metal back cover looks maximally practical. 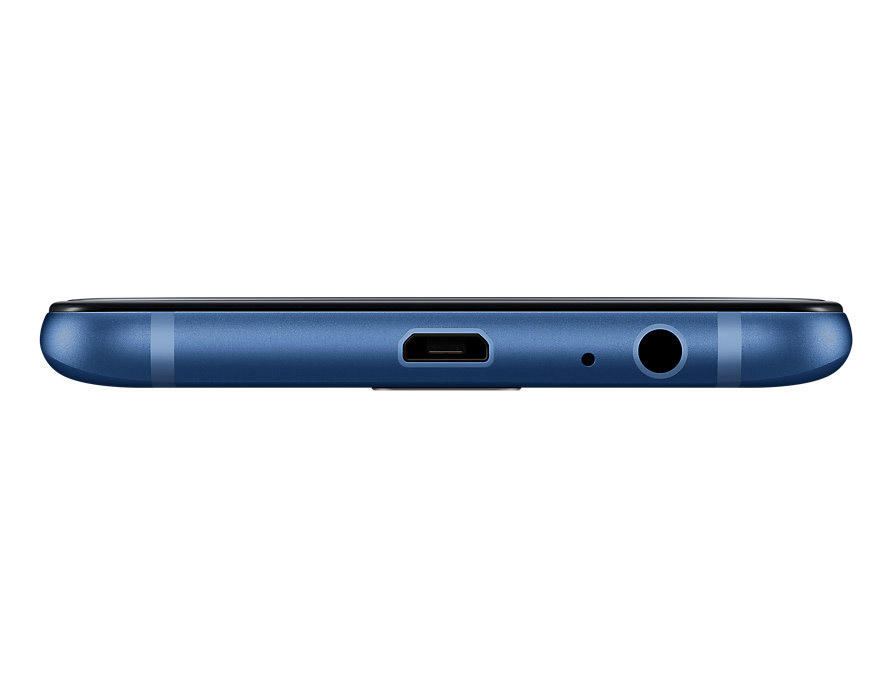 The screen at the Galaxy A6 SuperAMOLED with a resolution of 1480 by 720 pixels. The display is not the clearest, which is why some looseness is seen on the icons, although the fonts look good – the texts are convenient to read and this is probably more important than the icons. The screen goes slightly into the blue at the slopes, but nothing criminal and terrible. He has a good margin of brightness and on a sunny day to read the message will be no problem. In the display settings, you can turn on the blue filter, select the saturation, the format of the icons – in general, a fairly standard set. But what’s not here is Always On, although in large A6 + this technology is present. It is clear that this is an artificial restriction made for positioning, but this is a chip of the company, and here it would not be in the way. 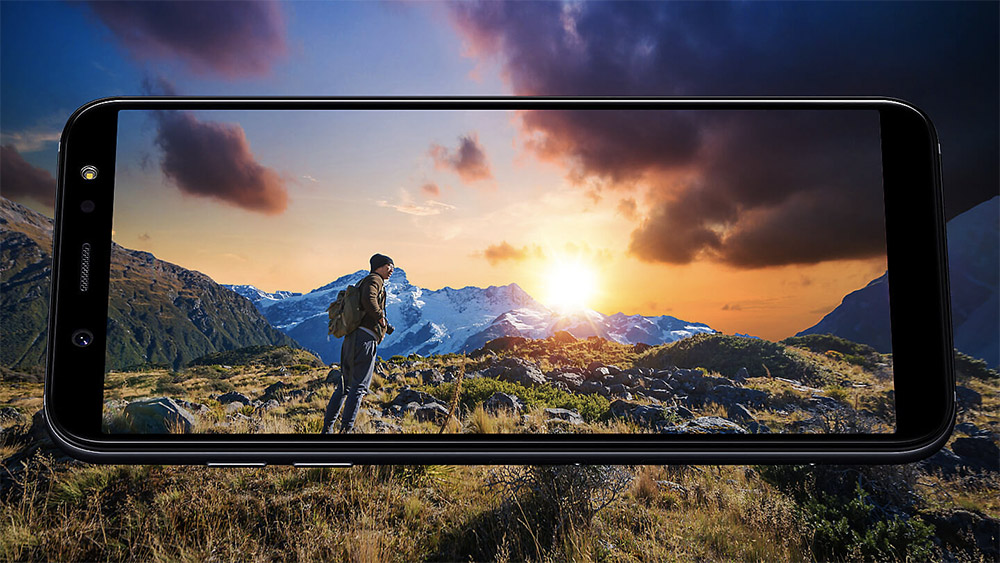 Technically, the Galaxy A6 is the average. The basic version of the smartphone has 3 GB of RAM and 32 GB of permanent memory. There is also a more advanced version, where there are already 4 GB of RAM and a drive for 64 GB. Running A6 on the Exynos 7870 processor is an eight-core mid-level chip. The system is responsive, smart, all animations are smooth, and turning does not slow down. Of course, the solution is simple and the smartphone is not for games. Something simple and easy to launch without problems, but heavy games like PUBG a little even at minimum settings. However, in the main “benchmark” of World Of Tanks, the situation is more iridescent and comfortable to play on the most simple graphics settings. But the Galaxy A6 is not at all about games. It is rather a smartphone for those who value reliability, brand, versatility and compact size.

And it is also suitable for those who like good self-cameras. The front camera here is not fantastic at all, but the result, considering the class of the device, this camera at 16 megapixels with f / 1.9 aperture gives good. There is even a flash for a selfie in complete darkness. 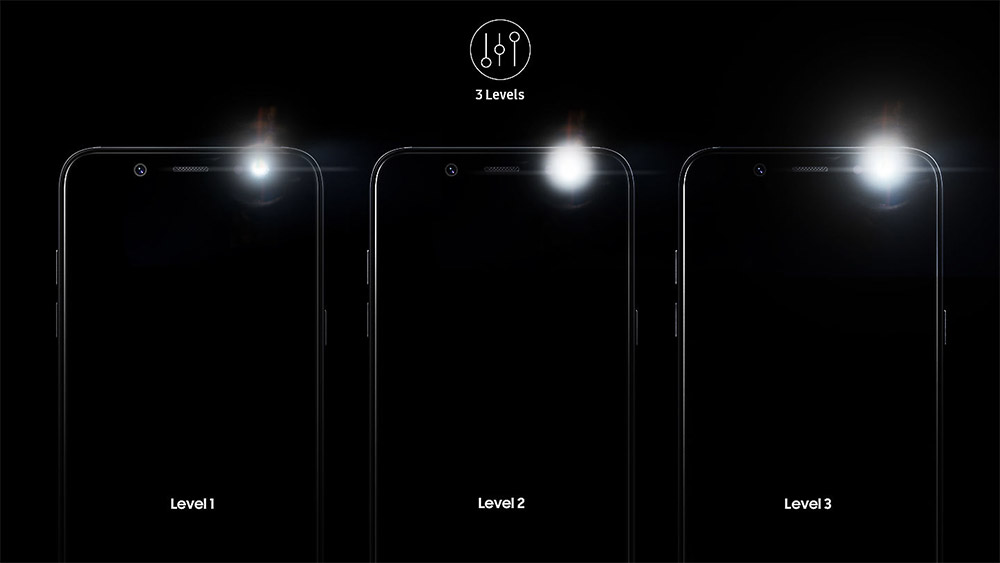 The main camera here is one, it’s also a 16-megapixel sensor, but more lightfast is f / 1.7. And there is no claim to this camera either. Removes A6 very well. In the afternoon, the pictures are detailed and saturated. There is an HDR mode that really works and comes in handy with a complex exposure with shadows. The truth is he does not work very fast. At night, the pictures become noisier, but the photographs are still of acceptable quality. Video smartphone shoots maximum in Full HD. On the part of the Galaxy A6, the solution is qualitative and balanced. 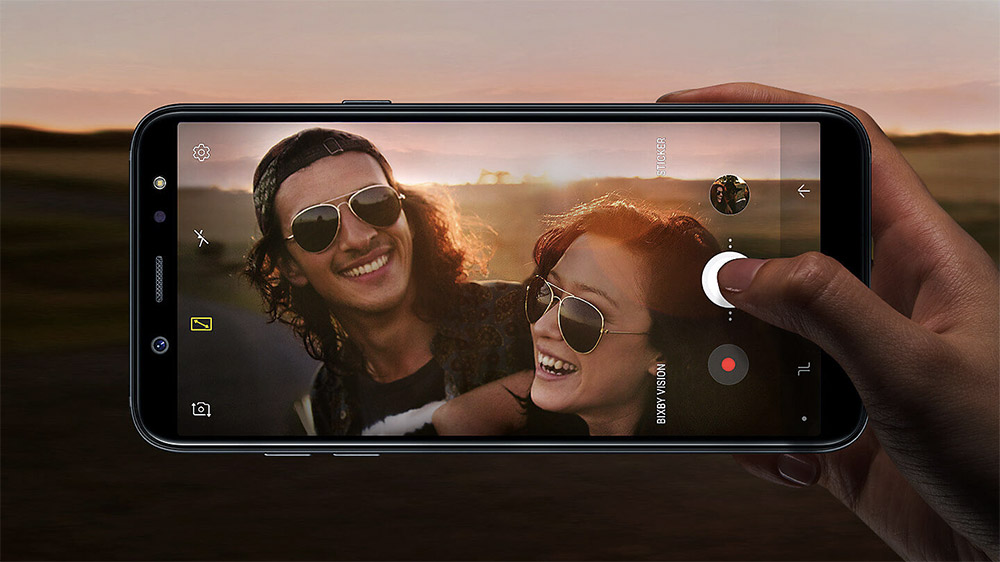 From what remains it would be desirable to mention a sound. It is assumed that the speaker located on the right end is difficult to close by hand, but during the game, the left index finger lies directly on this speaker. The volume is average, quality, too. Still, the smartphone has NFC, that is paid and other pleasures are quite possible. The running time from one charge is not a champion, but also decent. A full day of active use Galaxy A6 produces easily, a battery for 3000 mAh for a small smartphone missing. 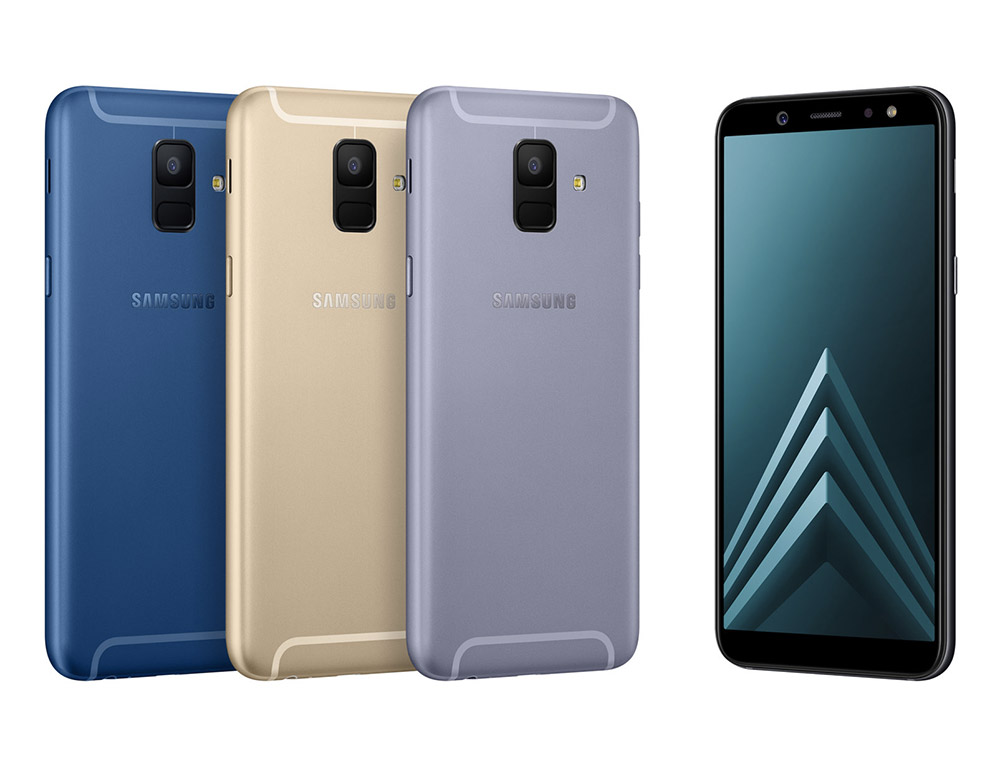 Specifications of Samsung Galaxy A6 2018

In general, Samsung has a very good smartphone. It has excellent dimensions, a good camera, and autonomy. I would like more display resolution and Always On technology, but it’s a mean. Therefore Samsung artificially removed some of the features from it. And the biggest disadvantage of the Galaxy A6 is its price. The official price tag in the CIS countries is $ 370. And this is for the average entry-level average, and the competition in this segment, as you know, is very large. By the way, Samsung has an increased version of this smartphone – Galaxy A6 +. But in fact, it is a completely different device. In A6 + is more and the display and its resolution, there is a dual camera, and it works on the basis of the Snapdragon 450 processor and even the front camera is different there, but the smartphone costs quite a bit more than the original A6. But this is a completely different story.