They say that the Huawei P20 Pro is very similar to the iPhone X. This is true because both of these smartphones have outstanding parts that allow them to do what other devices do not. But in fact, the Huawei P20 Pro has borrowed things: a vertically positioned camera and a cutout in the display called the Controller. However, the live P20 Pro on the iPhone is completely different. Especially in this unusual “Twilight” color. But let’s move away from the comparisons and talk in this review exclusively about Huawei P20 Pro – a smartphone that has the best camera on the market, as well as other advantages. 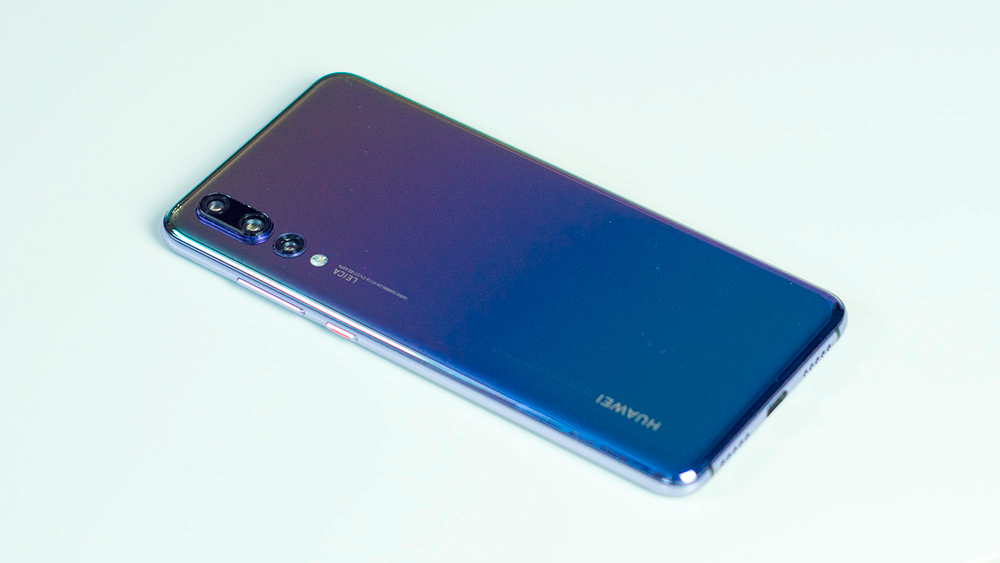 Returning to the color it is worth noting that the colors may not like everyone, but it looks spectacular, fresh and can even be a little lighthearted. But the colors in the Twilight gradient are pleasant and even stylish. The back cover is glass, but due to the fact that there is a void near the center of the apparatus beneath it, a feeling is created that it is plastic. And also this beautiful “Twilight” color is so quickly covered with spots that it is possible to evaluate its beauty only in the first few seconds. In general, the cover of this smartphone is necessary, including so that it does not swing on the table. By the way, in the complete set, there is an unpretentious cover for the first time. 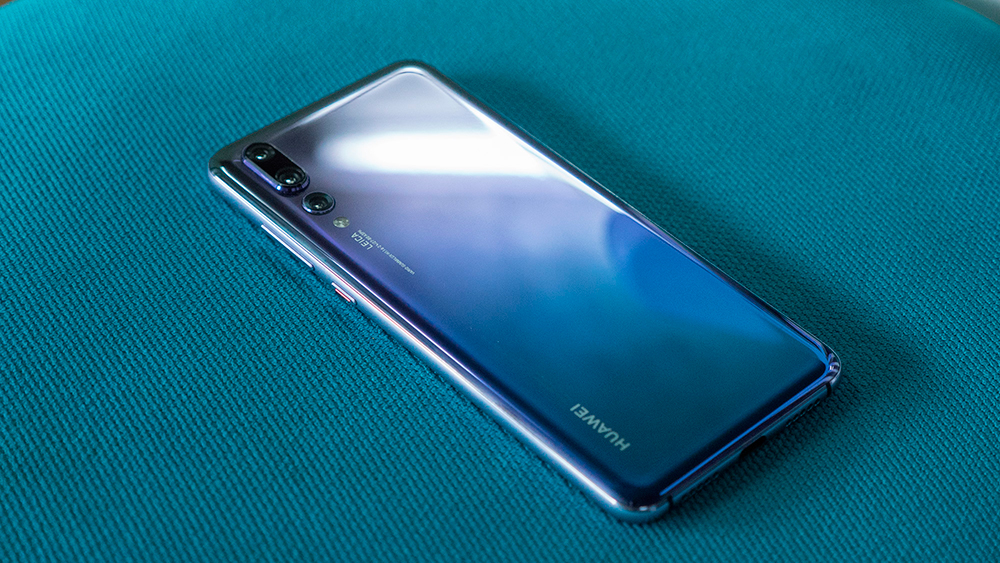 Huawei P20 Pro is a fairly large smartphone. It has a 6.1-inch display and if you need something more compact, then it’s better to look at the P20. The smartphone is heavy, tactilely pleasing, and the ergonomics of the elements are quite standard here: the power button and the volume rocker on the right side, the tray for two SIM cards without a memory card slot is on the left. At the top end of the microphone is noise cancellation and infrared, bottom of the Type-C connector, microphone, and speaker. Behind the triple camera, and on the front of the touch button “Home” with a fingerprint scanner. In monobrovi, there are sensors, a front camera and around the conversational speaker, which acts as a second stereo speaker. 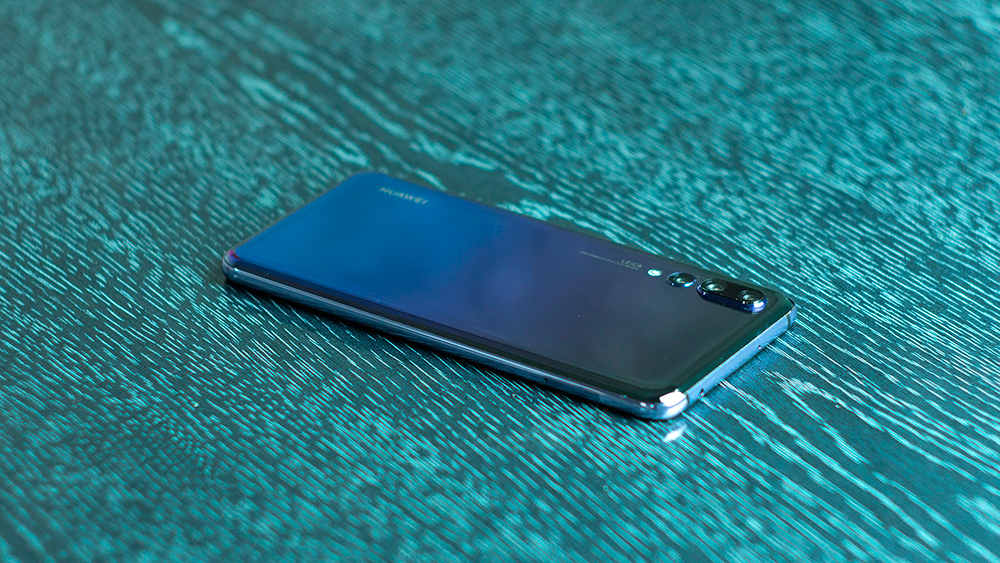 The speakers in the Huawei  P20 Pro sound pretty loud, clean and pleasant. There is a Dolby Atmos technology, which adapts to the type of sound. The main speaker gives a pleasant and surrounds sound, and the spoken speaker works instead of the people. The Huawei P20 Pro does not have a headphone jack, so you’ll need to use either a complete adapter or wireless headphones. In general, Huawei in his flagship gathered all modern stereotypes, and a cutout in the screen, and the lack of a “mini-jack”, and a glass case. By the way, why is there no wireless charging – a big question. 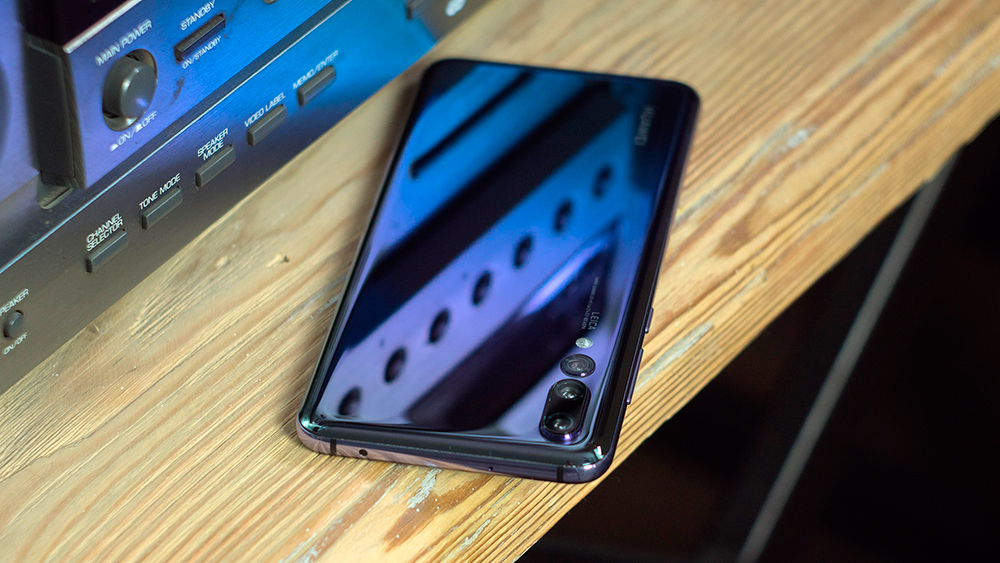 But there is no point at all – it’s to the screen. The large 6.1-inch OLED display is good. It is bright, perfectly balanced by colors, in the settings you can turn on the normal mode and mute the screaming colors, make them more calm. There is another borrowing from the iPhone – True Tone technology. Here it is called “Natural Colors”. It automatically adjusts the balance depending on the lighting. The display does not fade, does not invert, reads in bright sun. This is an excellent screen, worthy of the flagship. In the display settings, there is a “Controller” item and it allows you to programmatically hide the cutout in the screen, or rather disguise it. In this mode, the smartphone looks a little better. 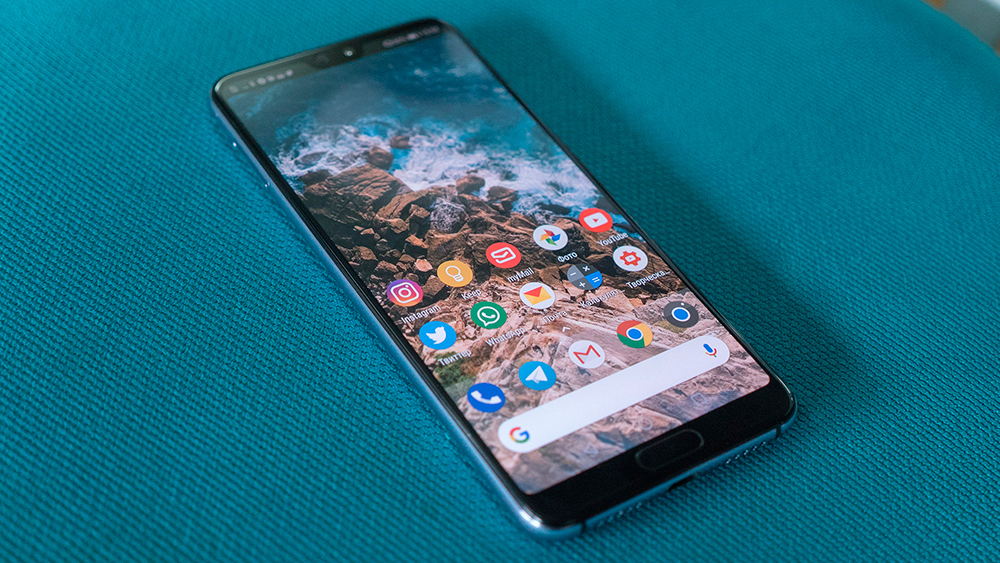 Technically, Huawei P20 Pro is not bad either. Its main feature is its own 8-core Kirin 970 processor and Mali-G72 graphics chip. And then there is 6 GB of RAM and a drive for 128 GB. The smartphone is pretty bright and there are no questions about the speed of the work. But in your favorite benchmark, and in the people simply “Tanks”, the graphics of Mali makes itself felt. The FPS can get a little lost, especially when you play at the maximum settings for a long time. In PUBG, the smartphone works without any issues at the maximum settings. We inform you that the Huawei P20 Pro may not be a gaming smartphone, but you can play it. And in ordinary life, it’s just a good and even quick smartphone.

Speaking about the speed, it is necessary to note the work of the fingerprint scanner. He is here as lightning, as in other things and always on Huawei smartphones. But why the fingerprint scanner, when there is a convenient unlock on the face and it also works very quickly. On the speed at the level of OnePlus 5T. In the settings, you can choose what to do after unlocking, go directly to the desktop or show the lock screen. Here, to whom that is more convenient. If you take a locked smartphone in your hand, then the display automatically lights up and it’s more convenient when the system lingers on the lock-box. You can see the time and notifications without going to the desktop. Similarly, it is implemented on the iPhone X. In general, everything in Huawei’s flagships is arranged so that switching to them from the iPhone will be all customary and it will take less time to adapt. EMUI’s launcher, as we have already said, is very much an amateur, but you can also adjust it to yourself by setting a different topic. You can change not only the icons, but even the color of the curtain, and changing the launcher, the appearance can be changed dramatically. In general, registration in Android is a fixable business, it would be a wish. By the way, the management here is also customizable. You can hang all the functions on the button home, you can activate the onscreen buttons or add a system of branded gestures. 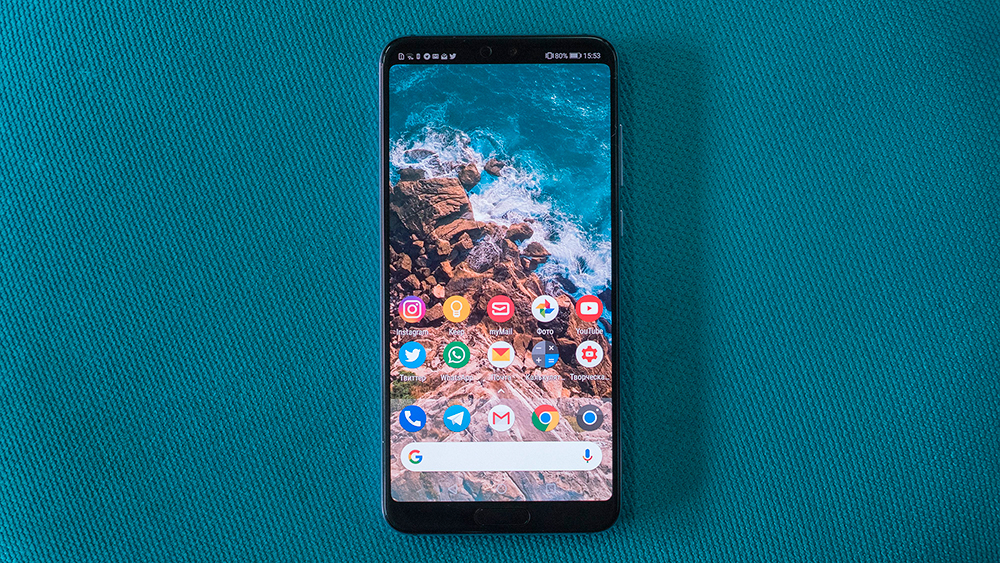 Well, now to the most important thing – the camera. Absolutely all specialists, for example, DxO Mark and journalists in one voice say that this is the best camera, and it’s true. Almost true, because there are nuances. The Huawei P20 Pro has three camera modules at once: a 40-megapixel main camera with a f / 1.8 aperture, an 8-megapixel camera with a 3x zoom lens and a f / 2.4 aperture and an auxiliary 20-megapixel monochrome module with a f / 1.6 aperture. All this is branded by the legendary name Leica. The main 40 Mp module can work in two modes 40 and 10 Mp. The best thing to activate is the 10-megapixel mode. In this case, you will get the maximum quality, but lose the size of the picture, which is not so important. The camera works paired with artificial intelligence. He really very accurately determines that you are taking pictures and adjusting the camera to make the picture better. But in reality, for example, when shooting in bright sunlight, it’s better to turn off AI. All that he does – unnaturally tugging contrast and saturation. When shooting in the afternoon or in very good light, we get a camera at the level of this year’s flagships. Somewhere, it’s better to shoot Huawei, somewhere Pixel, and in some situations, it’s easier to shoot on iPhone. 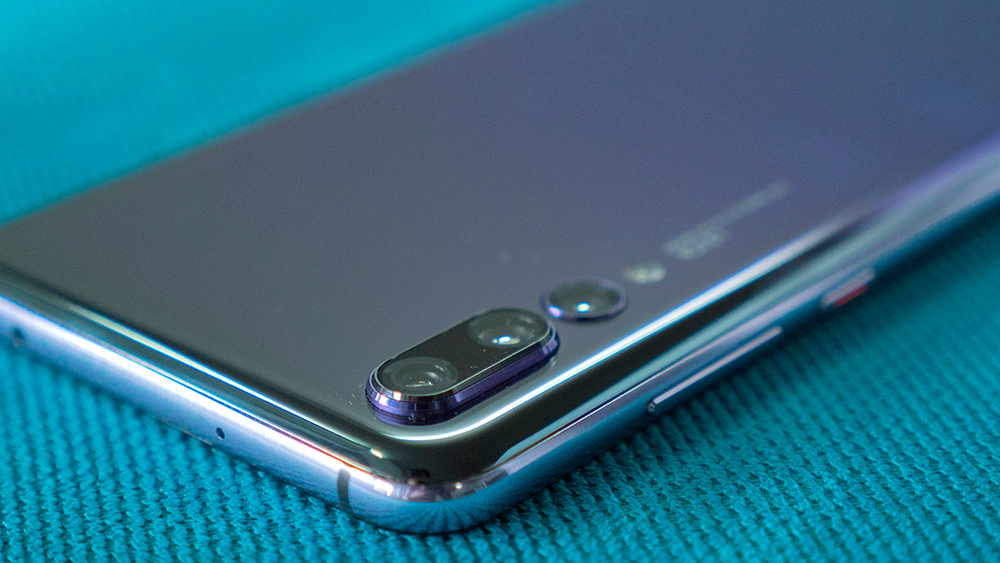 But if we talk about the night shooting or shooting at night, then the Huawei P20 Pro shows itself in all its glory. Immediately three things affect the size of the matrix of the main camera, it is larger than in conventional smartphones, for example, almost twice as large as the Galaxy S9. Secondly, the main 40-megapixel camera can work in 10-megapixel mode, where the data with 4 pixels are added and the matrix gets more information. Well, in the third place, software. The Huawei P20 Pro camera has a special night mode shooting at which several images taken with different exposures are glued together. Summarizing all this we can say that it is better that at night the Huawei P20 Pro does not remove any smartphone at all. Thanks to optical stabilization and the correct software, you can take pictures with long exposure and be gluing several frames with almost no blurring. Another component, where Huawei beat out in the leaders – optical zoom. The second camera, using an 80 mm lens, allows a three-fold optical zoom, which makes it possible to shoot almost without loss of quality. And still there is a hybrid 5-fold zoom and it also in certain cases gives excellent results.

But there are no wonders from the video shooting. Removes a smartphone is not bad and is prone to increase the contrast. Surprising that when recording 4K video or Full HD 60 frames per second does not work stabilization. The electronic stabilizer is activated only when recording Full HD 30 fps. Still confusing, that in the video mode there is no button to go to the three-fold increase. It is very inconvenient to zoom out. In general, the settings and modes of the camera are great. There is video recording in super slo-mo 960 fps, manual camera control mode, HDR, scanner, aperture mode, at which you can change the depth of field, etc.

The front camera in Huawei P20 Pro is 24 megapixels. The camera is not bad, there is a portrait mode and various decorations. The camera does not have enough detail, but in the case of portraits, it can play into the hands, because the roughness is less noticeable.

Huawei turned out to be a very worthy flagship. P20 Pro is powerful, it has one of the best cameras on the market, there is protection from water, an excellent battery for 4000 mAh. With this battery, you can squeeze 7-8 hours of the screen. The result is very impressive and you will hardly carry an external battery with you. The design is not bad, but it does not pretend to be a work of art, besides, borrowings are quite obvious. But most of all you can be confused by the price. Almost $ 900 in the CIS countries, and somewhere more expensive. Nevertheless, Huawei noticeably adds, each new flagship of this company is much better than its predecessor, and this trend pleases. If you liked Huawei P20 Pro, but it seems too big or you do not have enough money to buy, look at the Huawei P20. There’s a simpler camera, there is no protection against water, and the display is not OLED, but IPS.