Let’s talk about Huawei p20 lite design. You remember that the world divides into two groups: the one who likes monobloc or bangs and those who hate Apple and all that she brought to this world. And we just have to accept that many smartphones, including flagships, will be with this bang this year. Was it possible to do without it? Maybe yes. Could you think of something special, unique? Most likely, too, yes. But the nature of man and all the processes connected with it is arranged in such a way that there is always a simple way and there is simply no way to go a complex path of meaning. So here, everything is already invented. You can love or not like smartphones with bangs, but from the point of view of internal design, that is, the layout of the elements, for manufacturers this is the simplest and logical way. 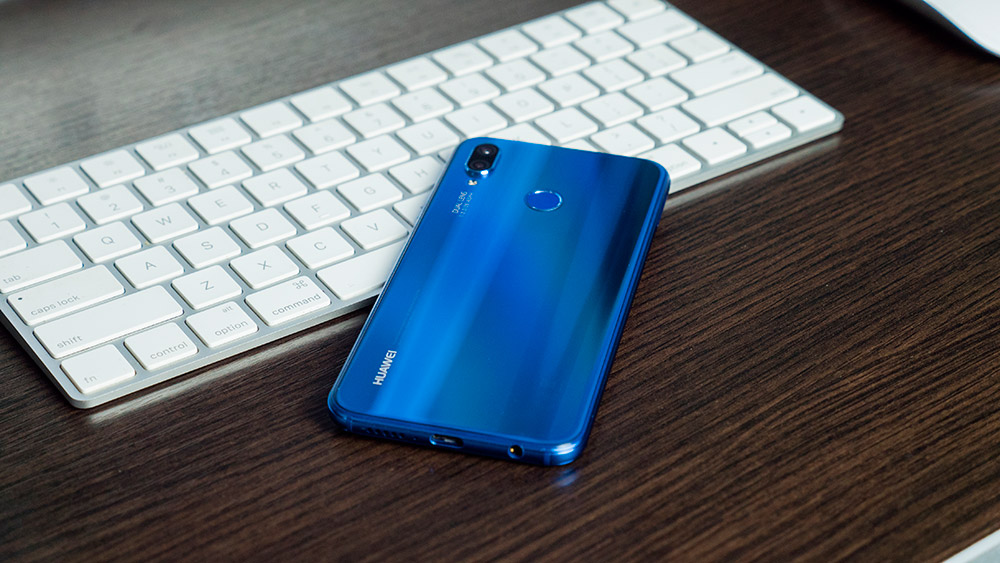 Now that we’ve sorted it out once and for all, a couple of words about the appearance of the Huawei P20 Lite itself. Yes, it looks like an iPhone X. But it looks like only from a distance or on pictures on the Internet. In real life, there is little in common between these smartphones. At a minimum, the iPhone X is frameless, and the Huawei P20 Lite only on the main screen and in the settings menu. To open any of the applications, as the framelessness disappears. In black, the background of the on-screen control buttons is colored, and at the top black hides the bangs. Visually, the smartphone is acquiring all the same frames. Apparently, until Google optimizes Android for 19: 9 screens and developers have their own applications, such an ambush will wait for every new buyer of any Android smartphone with a bang. 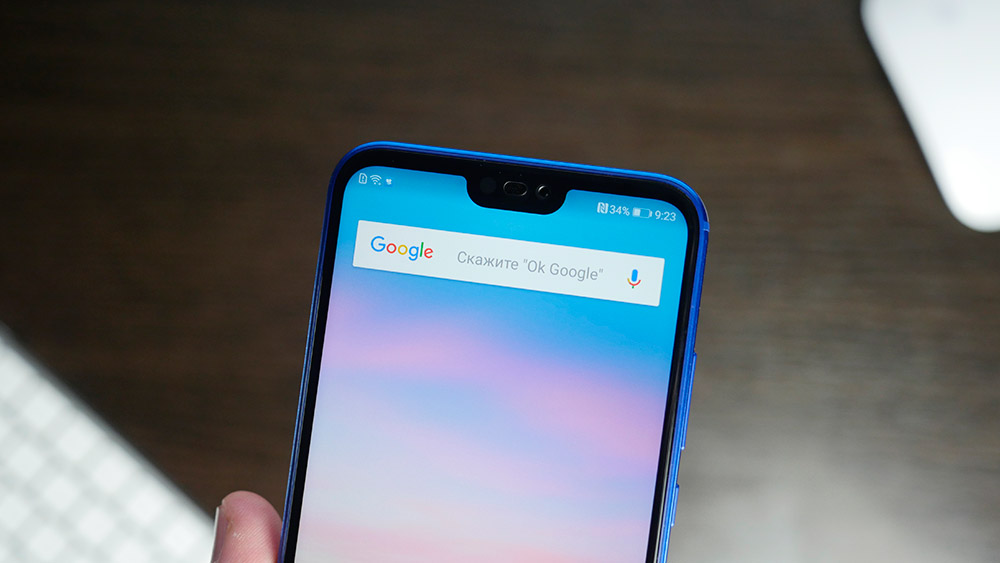 However, the Huawei P20 Lite does not look cheap. He has a glass case and in our case – an unusual blue color. The color, by the way, is really beautiful – bright, but not vulgar and not screaming. It shimmers and changes its color slightly depending on the lighting. The layout of the elements on the case is quite standard: a dual camera and a fingerprint scanner at the rear, a power button and a volume rocker on the right edge, a SIM tray on the left. Bottom speaker, Type-C connector and 3.5-jack for headphones. It’s funny that in older versions of the smartphone Huawei refused it, but here – please use it. 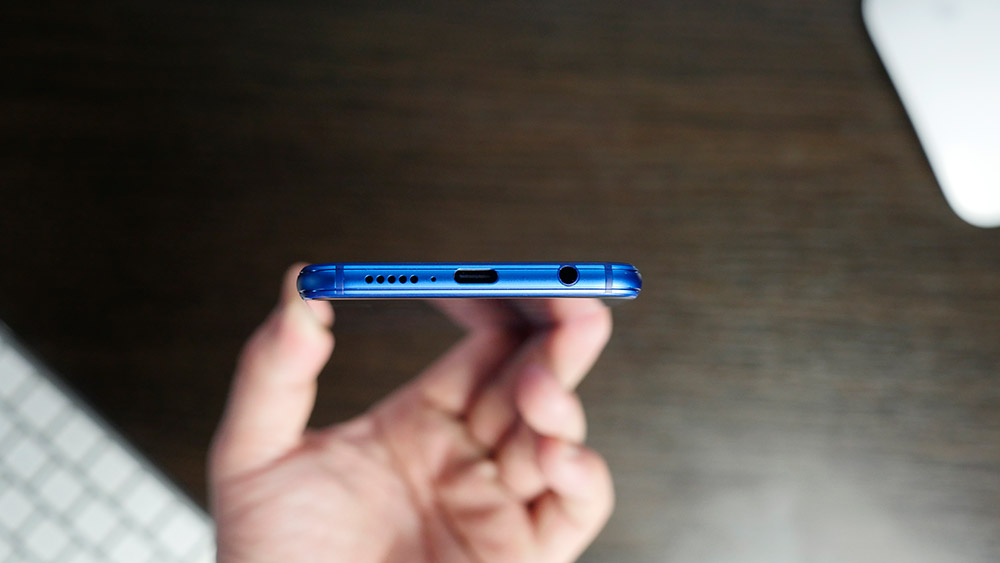 Compactness and other small things

The size of the Huawei P20 Lite is close to ideal. The smartphone fits perfectly in the palm of your hand, but the glass is not slippery, which makes it pleasant to hold. Thickness, weight, materials – everything is selected correctly and well balanced. But there is one “but”. The width of the bottom frame is much larger than the lateral ones. This literally completely crosses the meaning of monobrovi. That is, you could make one large frame on top, with all the sensors and three very narrow frames on the bottom and sides, like in the iPhone X. Of course, Huawei had reasons to make such a wide bottom frame. In the more expensive P20 and P20 Pro, it has a fingerprint scanner and touch button “Home”, and Lite version for some reason does not exist and the company logo flaunts its place. There are a couple of little things, like not symmetrically arranged elements on the lower edge and a very strange grid of dynamics, but these are really trifles, which simply do not pay attention. In other respects, the Huawei P20 Lite looks good and tactile. At Huawei, it turned out to make a pleasant device. 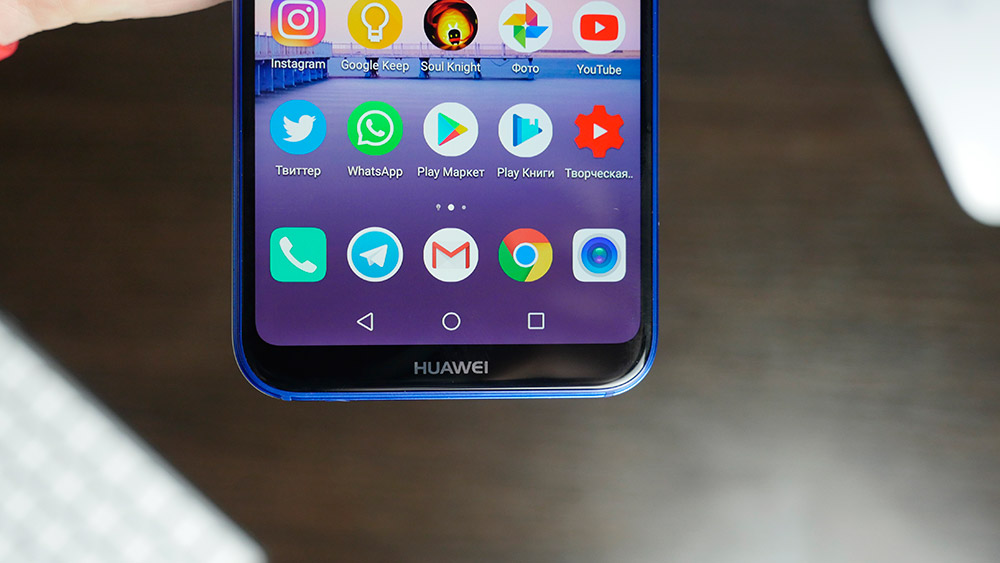 The Huawei P20 Lite uses a 5.8-inch IPS screen with Full HD + resolution. Aspect ratio is 19: 9. Because of the monobroduce, manufacturers increase the area vertically, leaving the working area approximately in a ratio of 2: 1. This is generally true for all applications. In any program, the top part of the display is used only for displaying icons and notifications and this area does not participate in the work of the application itself. The display is good, bright and even black is good here. Yes, it is not as lively and juicy as AMOLED, but the picture is still good, with maximum viewing angles and without inversions. In the display settings, you can turn on the night mode, adjust the zoom, select the display resolution or turn on the smart when the resolution goes down if the battery is low. Perhaps, the screen just does not have enough brightness in the sun, otherwise, it’s very good. 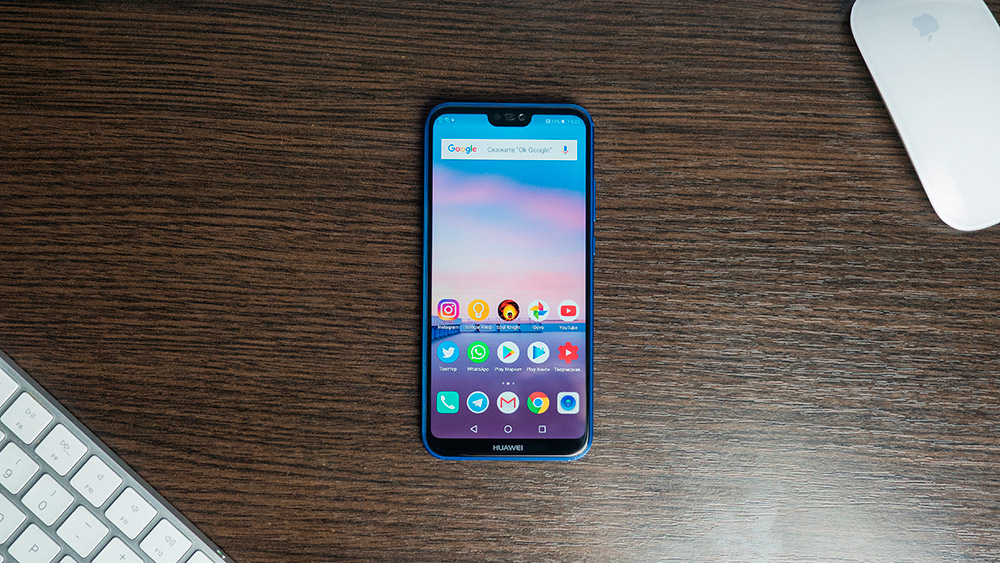 The speaker is one, but it sounds surprisingly nice, albeit without any claims. The sound is well balanced in the middle and without distortion at the top. There are not so many high frequencies at all and for the speaker in the smartphone, it’s even good. At maximum volume, a sound is not distorted and does not make you suffer. Only the maximum volume is missing, but otherwise, the speakerphone is not bad. As for the sound from the headphones, there is also an emphasis on the middle, and the upper and lower frequencies are slightly trimmed. In the settings, there is the possibility to adjust the sound to the EQ. But in the automatic mode, after all, there are not enough details. However, on the laurels of the musical smartphone, Huawei P20 Lite seemingly does not pretend.

The stuffing smartphone strong middling. It works on the basis of the eight-core processor Kirin 659 and is equipped with 4 GB of RAM. The interface is smart, scrolls and runs smoothly and without slowing down, that is, the system was optimized well. Almost all programs work quickly, in games, too, all is well. The same PUBG is quite normally played without hanging up, but on the minimum graphics settings. Here as in that saying – you go or drafts. With medium settings, PUBG is still playable, but not so smooth. Of course, Huawei P20 Lite is not a gaming smartphone, but the performance here is such that you can play normally and use any programs, and the system itself does not annoy suspense.

On the camera, Huawei recently makes a big emphasis and it seems with the P20 Pro they really could do something special. But this is a Pro, and in the P20 Lite, it’s all a bit easier. The camera shoots well during the day. The quality of images from the main 16 Mp module in good lighting is excellent. Detailing, color, everything is not bad. But in the dark, there is no need to wait for miracles. You can shoot a good shot, especially in manual mode, but most shots in poor lighting will accompany noise, overdrive, and blurring. And this is normal for a smartphone of this level. In its segment, Huawei P20 Lite will be one of the leaders. The camera is really good with a bunch of extra chips. Auxiliary 2 Mp sensor is needed to organize the portrait mode, wide aperture mode for background blur, live photos and so on. If the background blur mode works really interesting, then the portrait mode is by no means the best. The separation of a person from the background here is very tough and it catches your eye. The camera has manual settings and several ready-made presets for different shooting scenarios. The video is recorded maximum in Full HD, there is no stabilization either. In a motion, the picture turns out to be jerky. The very quality of the video is not bad, but in case of insufficient lighting, noise again appears. 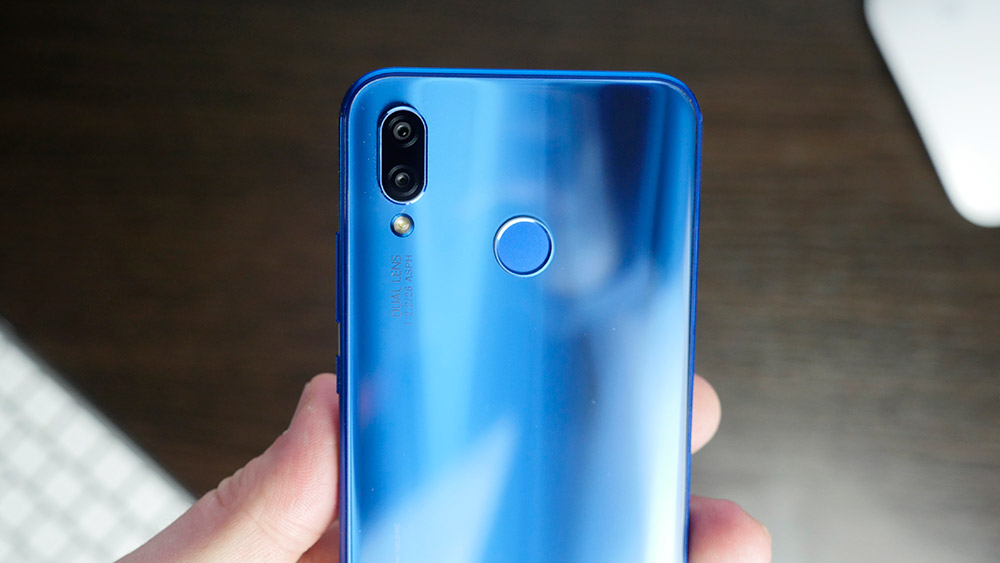 The front camera is also 16 megapixels, but more lightfast – f / 2.0 versus f / 2.2 on the main module. Selfies turn out to be sharp and sharp, and still there is a background blur mode. He aggressively cuts out the background, but with good light you can get a couple of interesting frames.

Perhaps the weakest part of this smartphone is its EMUI shell. It really looks rather outdated or, say, unnecessarily “Asian”. But as it turned out, this launcher has its fans, which is probably due to the wide possibilities of customization. In addition, the drawbacks in the form and style of icons and other design are silly, because Android is so good that you change everything and do it because you like the question of several minutes. In this case, the smartphone is not overloaded with proprietary applications and other tinsel. 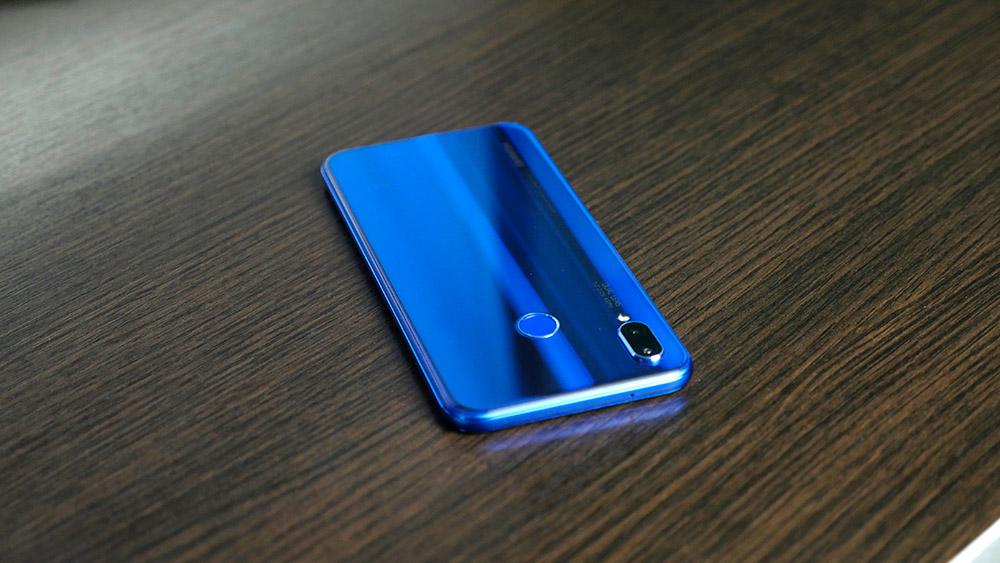 Smartphones Huawei has always been well optimized in terms of autonomy. P20 Lite is no exception. A 3000 mAh battery is enough for a full-time working day with a good load. The smartphone provides 4.5-5 hours of screen operation, it’s not a champion figure, but very decent and an external battery you will rarely use. The P20 Lite has support for fast charging, thanks to which from 0 to 100% of the smartphone is charged in about an hour and a half. There is a proprietary system of energy saving, including lowering the screen resolution for better autonomy. From the point of view of the battery, there is complete order. 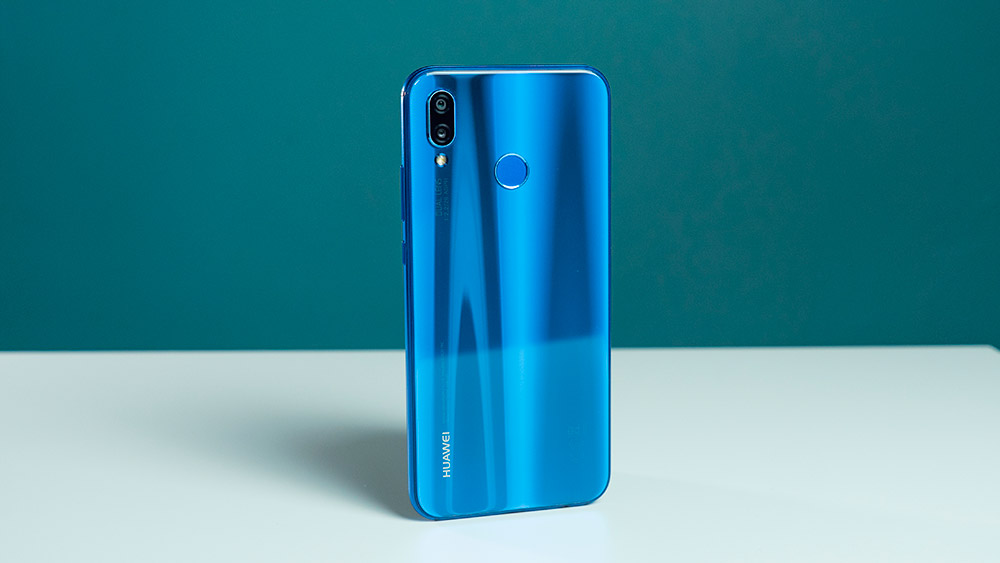 The face scanner for unlocking starts to meet in smartphones more often. This is a natural process, which becomes understandable in the example of the iPhone X. The dozen simply does not have other ways to unlock due to its design, including internal. And Apple argues that it’s safer thanks to their True Depth technology. Apparently, therefore, Apple decided to radically switch to Face ID. But other manufacturers do it smoothly and accurately. The face scanner of the Huawei P20 Lite is fast, but there is also a familiar fingerprint scanner. Oh, its speed does not make sense, because, at some point, the Huawei fingerprint scanner was considered a benchmark due to its speed. Huawei P20 Lite is no exception. 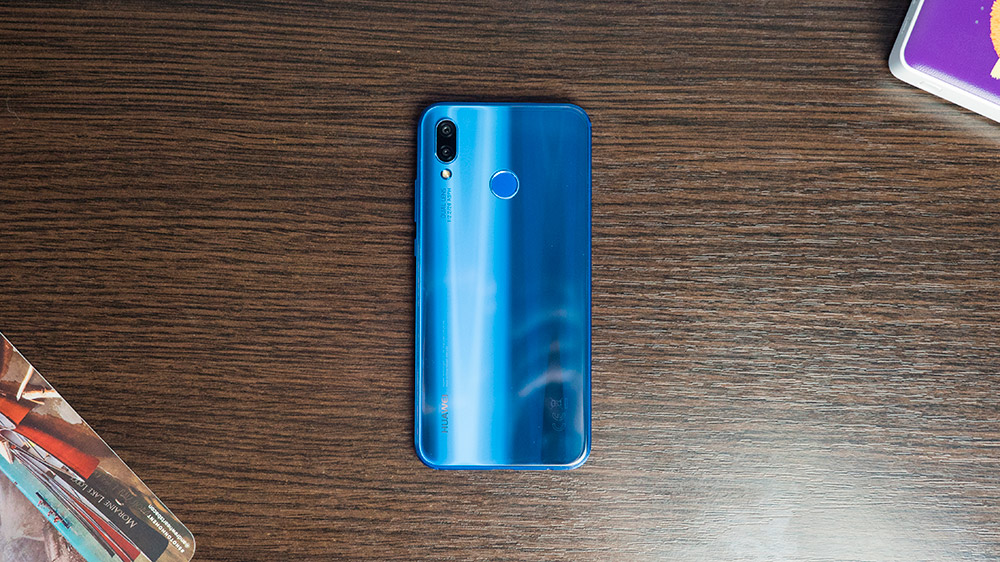 Huawei P20 Lite is a very nice smartphone, which has both pros and cons. There is not the most original design, but with the finishing materials and how the smartphone is assembled and lies in his hand, speak in his favor. Good autonomy, a decent camera for this class, fast fingerprint scanner and quick unlock on the face. All this makes the smartphone very interesting for buyers, even despite the unreadiness of the whole Android and applications to screens with bangs and a ratio of 19: 9. Its predecessor P10 Lite was and remains a very popular device and, apparently, Huawei P20 Lite is waiting for the same fate. Yes, you may not like bangs and design in the spirit of the iPhone, but then you definitely need to accept it. In this segment, almost all smartphones will have similar features. But P20 Lite leaves behind a positive impression.

It is also worth noting that we had a pre-release version of the device on the review. It is possible that in the finalized and ready to sell the smartphone, there will be fewer cons.

Review Amazfit Bip: dancing with a tambourine at an affordable price?

Review Amazfit Bip: dancing with a tambourine at an affordable price?